I feel I should be writing another blog post ...

I feel I should be writing another blog post ... But I really don't feel like writing one! I'm still in the lockdown pits. Thankfully home education is over for a week! So hopefully I can calm down somewhat and return to some form of "normal". A good sign of that will be more posts! Right let's get to some catch up ... 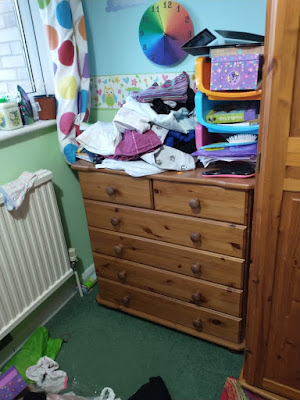 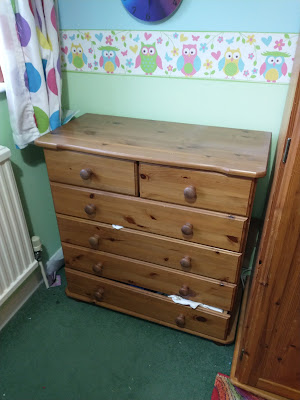 Once this was done I had then tidy the walk in to actually be able to access it. Dumped the dolls house on the bed and pulled out the suitcase, chair and box. The stuff on the desk I finished up by putting into a box to come out another day. I then turned it round to the only position it would fit. However I didn't like it so I pulled it back into the room further so that I could chuck junk into the back corner instead. (You'll see in photos further down) I then move the bookshelf into it's new home by the window. 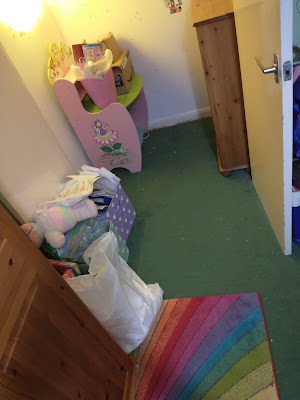 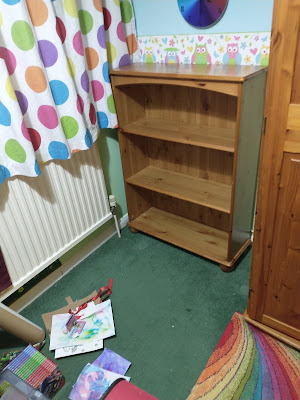 I fill it up and it looks some homely and cosy once it's finished! I do love a good bookshelf me! 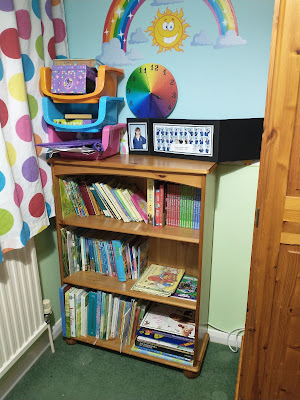 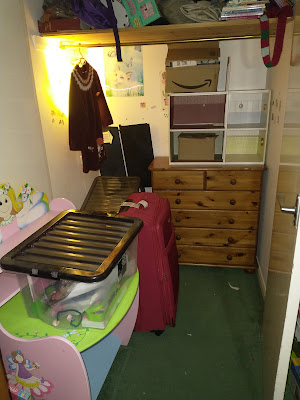 Once the book shelf was done the chest of drawers got the drawers put back in and all the associated junk in this corner around it. I tested out her rail and it could be moved back against the wall a bit more as it sticks out some what. So will get hubby on the case.
Whilst I was dealing with all this Sophie was downstairs creating a rucksack out of card with paper straps. Pretty creative and impressive!! 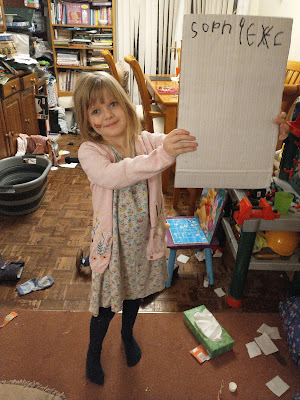 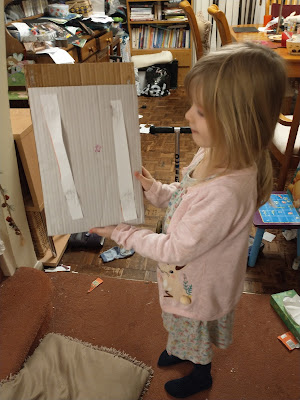 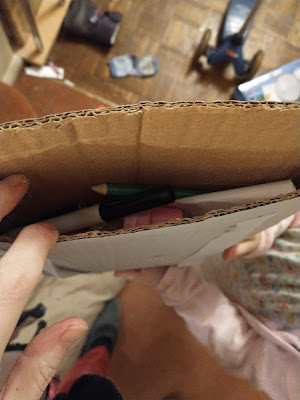 After tea I came back to attack the top shelf in the wardrobe. Had to take books down that I had saved up for J when older and put on her new shelves. Got rid of some bags that were mine and hubby's. 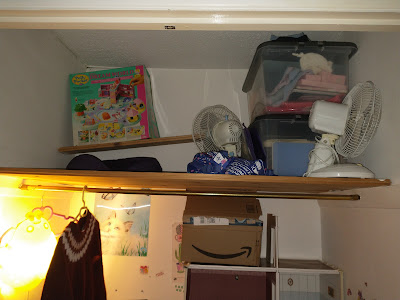 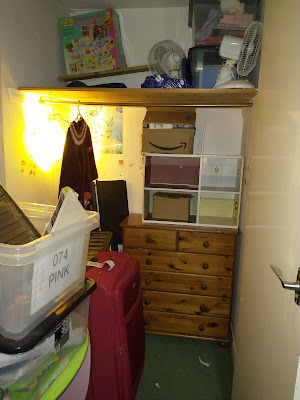 Got a fan in there, sleeping bag, 2 memory boxes of stuff from when she was a baby and nursery and a couple of other random bits.
Well it's taken me 2 nights to get back to writing this. Such is kids who don't wanna sleep during lockdown! Someone is always still up in the 11pm-12am hour! Jess hasn't been up at 07 something at all since she turned age 8. Which is both so nice but also a surprise! She sleeps around 10-1030 until around 9-930am at the moment roughly. Sophie has always been a late bird and is going down around 11-12am and awake around 10am+! 11am yesterday! Any way got them both off around 11:30pm tonight. Just caught up on BBC news, emails and Facebook land. So now to try?! and get this finished and up. Thankfully though tonight I feel much more myself and like wanting to write to this so that's good too! Right where was I?
SUNDAY 31ST JANUARY:
Mostly a down day. Down as in doing nothing. Not down as in down in the dumps. Although tbh I probably was too ... January has been sooo haaard!!
Started the day with breakfast and caffine in bed with laptop. Nothing unusual there then! Sophie made a rainbow picture for the NHS off her own back. 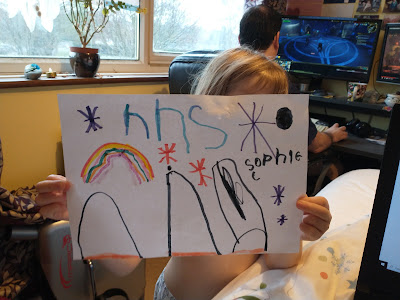 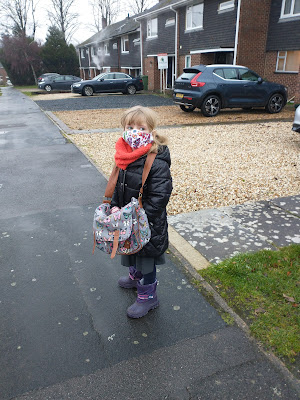 It was a proper snow flurry day so me and Sophie decided to go to the shop just to get out and see snow falling around us. Not necessarily an essential visit although I do want to say we got something that we needed? Was it loo roll? Margarine? Either way it could have waited a couple of days but we got it any way. Forgot what it was though! We brought some daffodils that Sophie chose whilst we were there too. She wrote a cute shopping list which for some reason I didn't get round to photographing. Her most prized item to buy was brocalli?! We have some in the fridge so managed to avert her from this to some fruit instead! We got chocolate, some sandwiches for a super late lunch and other random bits too. Doesn't she look cute in her snow boots all dressed up for snow! Typically just as we went out it was more sleety and when we came out the shop it had stopped. So much for falling snow then!
Later in the afternoon I sat downstairs under my snuggly with songs of praise and my knitting. All knitted but now to sew in him and stuff him! Here's his progress to the finished article. I wasn't happy with it but Jess said it makes him unique that he looks so squiffy and out of shape lol. She's sooo cute!
His mouth is too short one side and his nose doesn't look nose like. It annoys me! Jess tied the bow at first but then I had to redo it later. I even sewed his head on wrong. The seam is meant to go down the middle not one side. I am so my own worst critic! Any way here he is! And amongst the daffodils we brought starting to open already and only a few hours indoors! 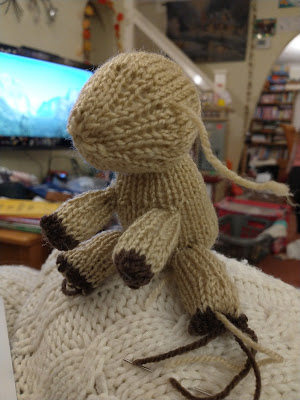 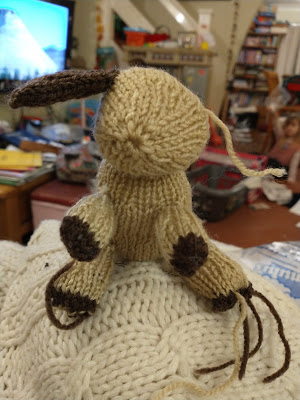 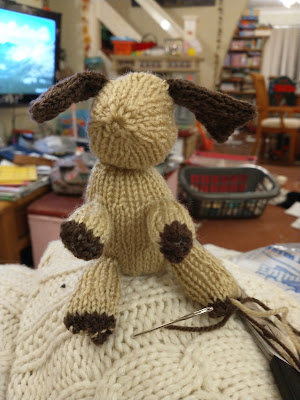 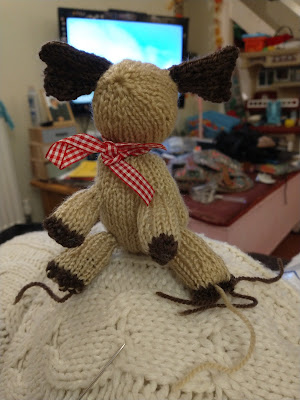 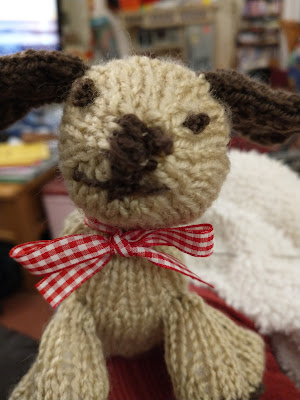 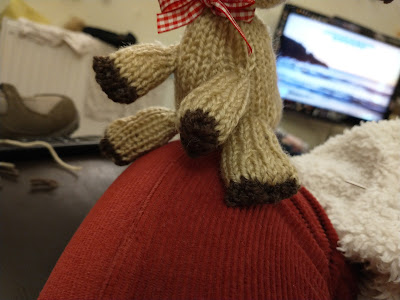 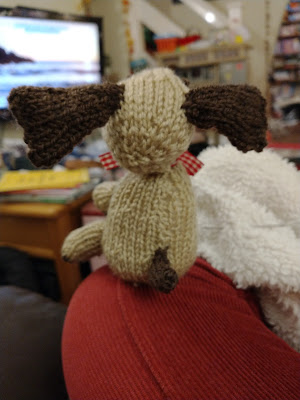 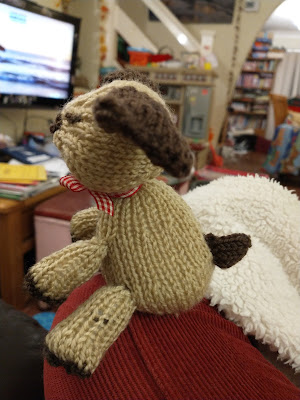 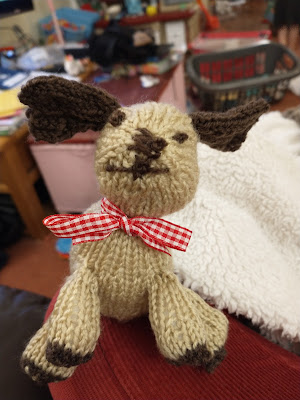 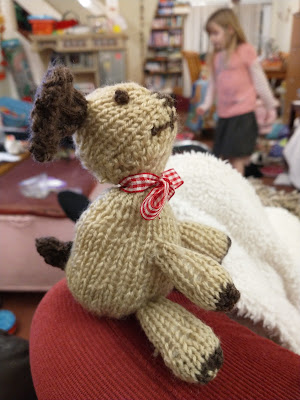 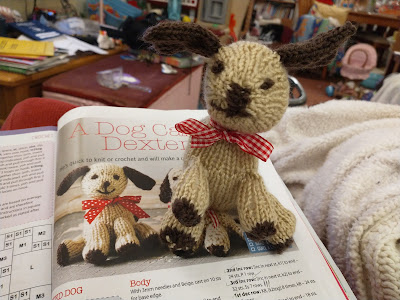 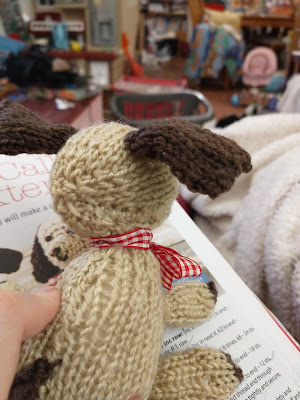 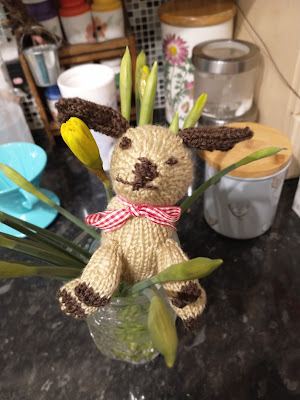 Right this will do for this blog post as it is very picture heavy and I don't want to make it so long that it bores you all to death!!
I will try and get another one in before the weeks end as it is half term.
It is definitely nice not to have to get up and battle kids into doing work! It looks like the weather is starting to warm up - with a big increase coming at the weekend! So obviously this is ringing the garden alarm bells in my head. Urgh not started planning or anything yet! Can't be bothered/too busy having to educate kids/dealing with threadworms to start. I know the year will run away with me again and i'll be behind as usual! Will jsut try and bung as much stuff in as I can directly into the ground me thinks!
Right that's it! Sleep well/Good Morning All! Keep looking up!  Xx
Posted by RebekahC at 17:33