As I write this catch up it is now less than 1 month until Christmas. ARGH! I need to get writing lists, cards, and buying presents! Think I will get my folder out tomorrow! I'll start by writing card lists and then I should check what presents I have already for people and write them down. Then I know what I have and what else I need to buy. Sounds so organised eh! I still end up with too much stuff every year! Any way enough worrying about that now for some catchy watchy uppey wuppy! ...

Last night Jessica lost a tooth. Finally! This meant mummy had to play tooth fairy. She was asking lots of questions and is convinced the tooth fairy isn't real. At 9 this is barely surprising. Like santa last year she was really questioning it! Mummy isn't ready to get it go and is playing the game still though!! We delivered some money - I've forgotten how much! Think it was £2? and she also wrote a note she left with her tooth asking questions such as how big the tooth fairy is and what she does with the teeth after. So we went in with the money and a letter back to her from the tooth fairy. She was too damn excited though so I got caught in action! I muttered something about bumping her pillows up because they looked uncomfy. I wasn't able to get in there and do the deed until after midnight she was up so late! Any way the deed was  done and here she is reading her letter - wrote in daddy's handwriting otherwise she would know it was me!! Last time I wrote in mine and she recognised it. But somehow managed to fob her off lol. 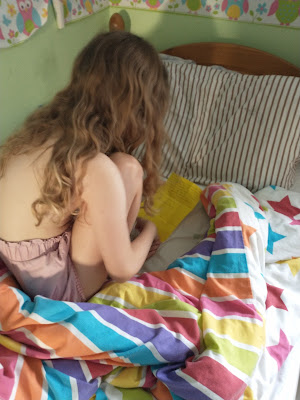 Today I tackled Jessica's wardrobe area that had loads of clothes on the floor she had just thrown out the drawers! So i've piled on the bed and folded for her to put away herself. 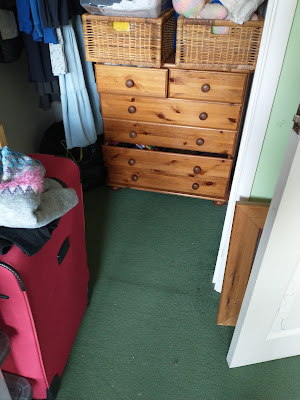 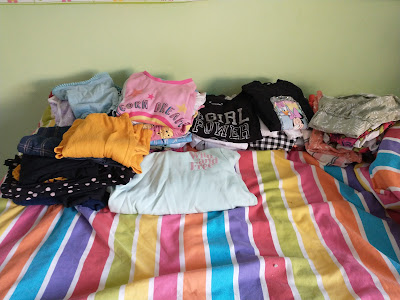 Forgot to show you all this sign a few weeks back. Jess made a yoga class on our bed. With a YouTube vide and made us all follow it. Love the sign. It's still on the door now lol. 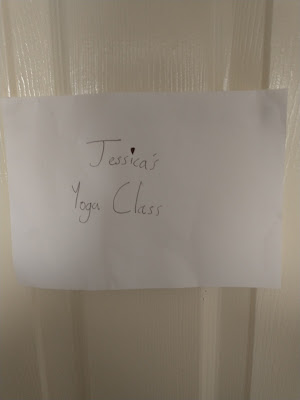 Speaking of Jessica. After tea she made a restrurant (I can never spell that word!!). She put candles (battery operated before you all call the social!) and plastic boxes from the landing with t-towels on for tables. They have cutlery and even table numbers. She made a menu and put on the wall and Sophie was meant to be the waiter. It all went a bit boobs up though when Sophie started eating the food meant for us! Some of it was apple that we had given to her as fruit after tea but somehow had got brought up for our meal lol. Much shouting and falling out and then Jessica got upset because Sophie had ruined her resturant. 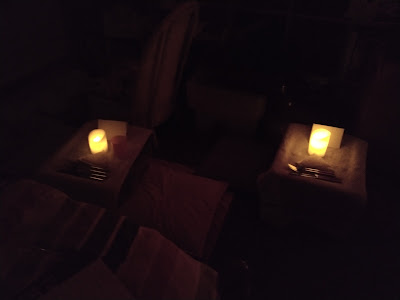 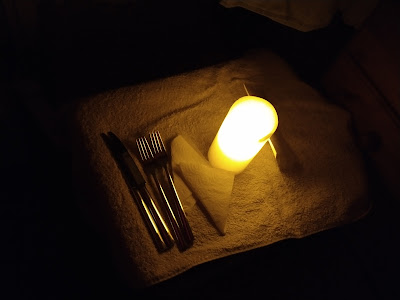 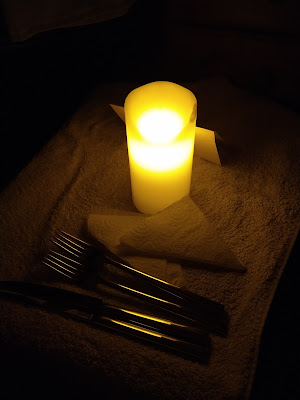 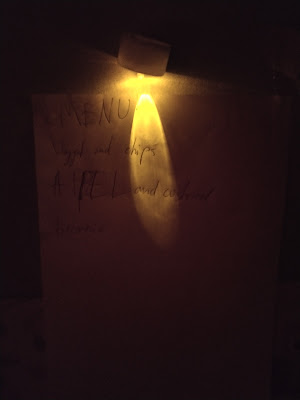 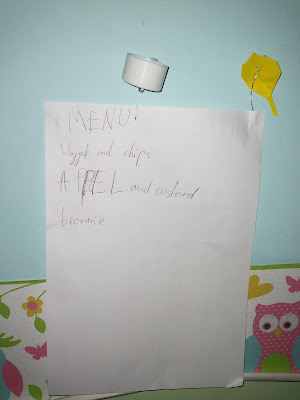 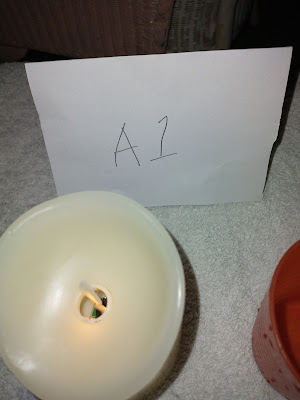 Bedtime rolls around all not soon enough! Once school prep is done and they have passed out I crawl into my bed net and light the candles for some chill and to write another blog post! 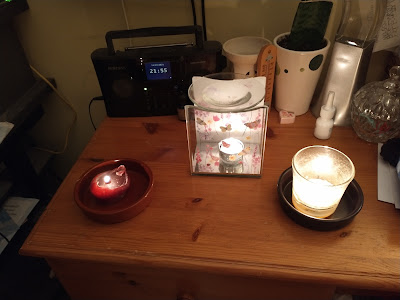 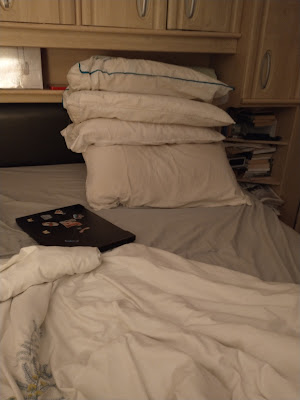 Tuesday 12th October:
Well this is going to be quick. Mummy tidies up downstairs and finds yet more conkers dumped on the dining room floor! 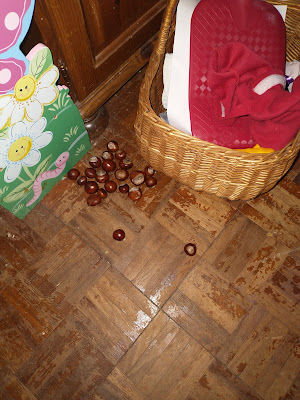 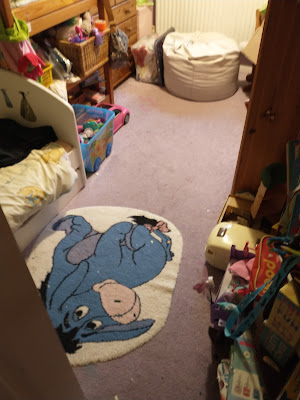 Mummy does some washing up and has a clean sink - Isn't this all very exciting! 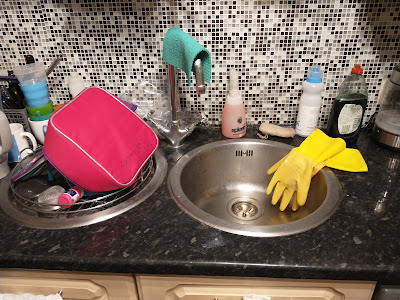 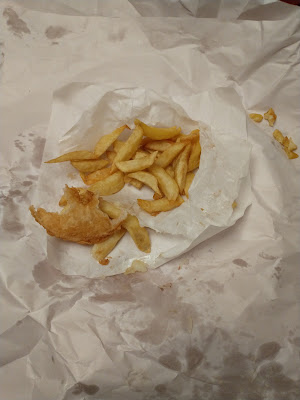 And then the kids make a band before bed with saucepans and lids and it all gets rather noisy!! And yes that is knitting needles in Sophie's hair! 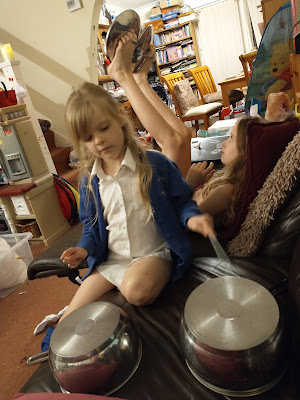 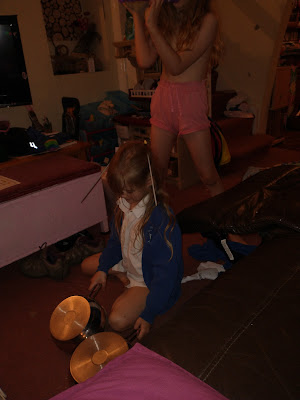 All standard fare of a day. Have a visit from a lady in the evening to buy some chicken eggs. We have started selling them now for £1 for 6. We regularly sell depending on availability to around 5-6 ladies.

I'm getting desperate now for updates so here is a picture of chicken feathers on the living room floor LOL! And the new school menu! Took a photo in case I loose the blinkin' thing! You really can't get much more random than this in a blog! 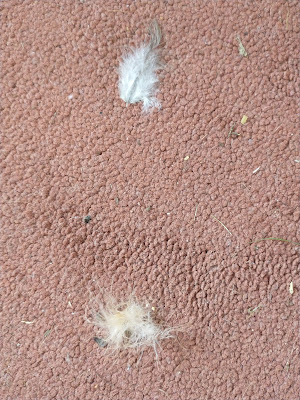 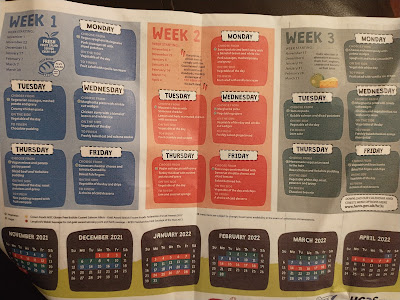 Today is all about the chickens. They are migrating to the patio today. The nosey parkers even come and look in my patio windows and peck at the door to be let in. Sophie has Speckledy in after school run and puts her in the pram for a ride. See video here: https://photos.app.goo.gl/f2dxPnWUnVcHK6da6 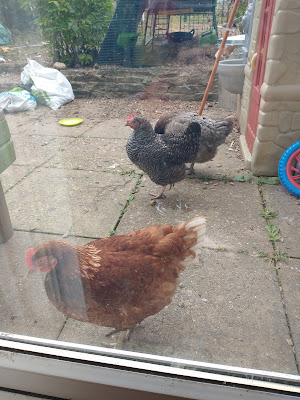 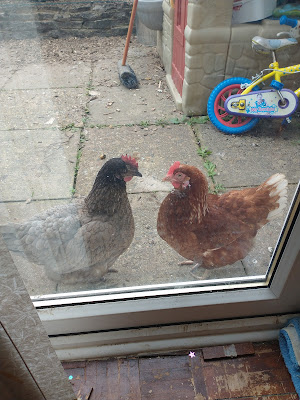 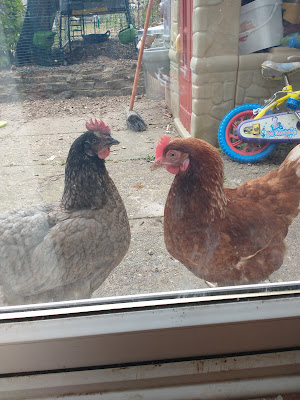 That's it for another update! It's been a busy week here. Sophie had her flu vaccination and then was off ill for two days. A good immune response there ... I had physio for my back on Thursday. Seems it's all to do with hips out of line (that'll be back to when I was pregnant then) and piriformis syndrome which is a muscle in the buttock that compresses on the sciatic nerve. So a type of sciatica. More exercises ... Then come Friday it was time for my covid booster. Yippee! So i'm all set for Christmas! Right time to start writing another update! Lots of love to all. From The Mad House Xx