Update on the girls!


So I thought I would give you all an update on the girls as it's been some time since i've posted much about them.

Sophie started nursery in October. This however did not give me as much time as I expected! The plan was 2 mornings a week so that I could spent one morning to myself and one spent on catching up on stuff in the house. After CBT I learnt that the biggest priority needs to be a happy mummy = happy household so I have always put my day before the house day. It has mostly worked out from October - December that I only had 2 mornings to myself in 2 months! This was mostly due to illness of someone in the house or appointments. Thankfully since then things started to settle down a little and now christmas is out the way I hope to do a bit of a catch up tomorrow before yet more appointments take over my Thursday meaning I will lose that. Hubby said that at easter last time we put J into nursery one full day so I'm thinking we should repeat that again. 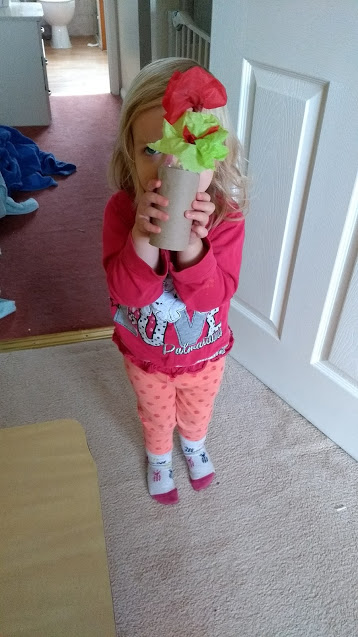 Any way she has settled into nursery really well. We have had tears probably only a handful of times. Up until beginning of December she was only in once a week due to illness which meant a slower settling in time. She has recently been doing walks down the farm to see the cows and sheep. She was spectacularly wet and muddy up to her waist last week from puddle jumping. Literally dripping! Had to strip her before getting in the car lol.
She recently made these pretty flowers too :-D

She saw the health visitor last month who confirmed she is doing well. They would like to see her weight a little more under control but as when I last weighed her she had lost some i'm not bothered. Just going to keep an eye on it. She also can't jump up and down with 2 feet together yet or hop on one leg. I'm sure this will come with time though. I don't remember when J did it.

She continues to love eating all veg, fruit and salad. Seeing a toddler eating lettace is bonkers!

She is far more mischievious than Jessica was and likes to get hand or nappy cream and plaster it around the house ... She also likes to get felt tip pens and decorate the house with those. She's had paint out and got that over the carpet, play dough and plastincine! The problem being here is that whilst she can't reach her big sister can!! 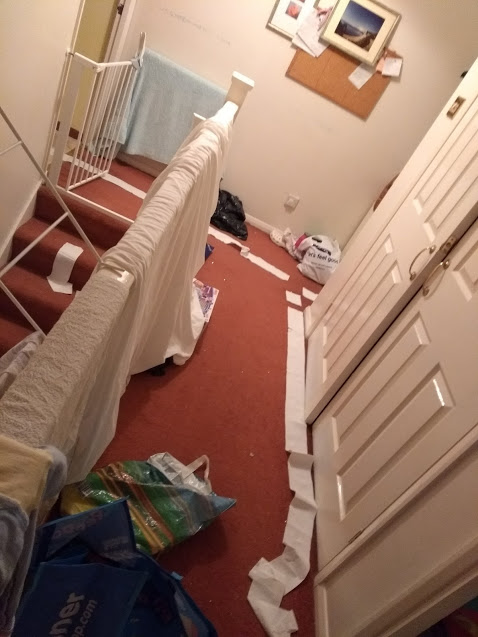 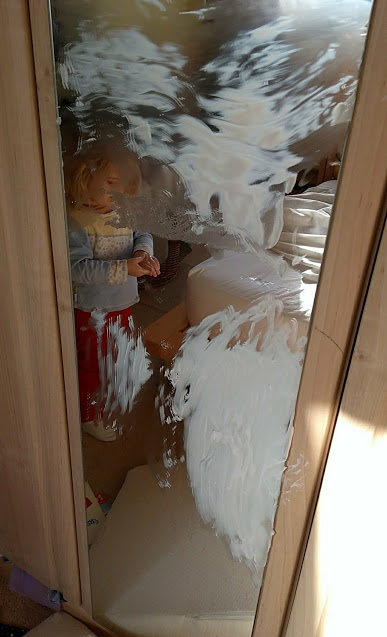 They very much do conspire together! Last week I was hoovering in the nursery when I stopped I saw my bedroom door had been shut. It was silent - Silence = mischief! Opened the door to find out Jess had got down my nail varnish from up very high and rowed it all up (plus other make up etc) and made a dressing table. They were decorating themselves and the chest of drawers in blue nail varnish!

Jess loves showing off and putting on shows. At christmas she sang in the school choir in town on stage. Since then they have been standing on kids chairs and putting on "singing" shows for us to watch and listen too. Often this involves dressing up as the queen and using standard household items as mics. 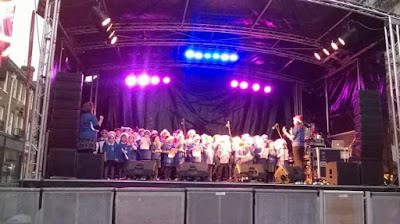 Jessica is very into creating. Just as she was in reception. She loves making things out of card and paper from nothing! We are currently making a tudor house for her school project and she turned to me last night and said "mummy I love making things with you. We never have time together any more." It was very sweet. A part of the mummy guilt that all mums have. Dividing time x 2 + is hard.Often impossible!

She loves to try and make her own food and lunch for people now too. 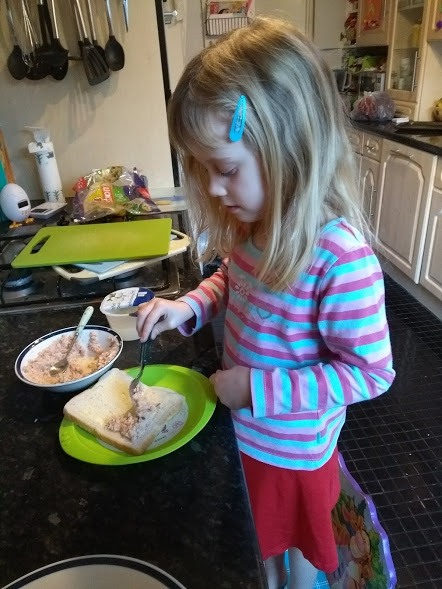 We had parents evening in November and they said she is doing fine. Middle of the road for everything. She appears behind to me in spelling but is fine on reading and maths so i'm not too bothered. So longs she keeps moving forward. She is one of the youngest in the year so it's no suprise really.

She is definately a high needs child emotionally and if really over tierd can be like a hormonal teenager. She just turns into a blubbing mess! She still asks for lots of one on one time with mummy. This is especially worse after Grandma or someone else has been here where she has had one on one before. We most get at bed time when we read her school book or she reads another book to me. I tend to try and send Soph downstairs so we can have 5 mins or so one on one. She reads really well and thus wants to read every night. This however brings a new dilemma on those nights where you are really late and want to read a quick book yourself to get them down quick lol!

She loved getting involved in christmas preparations. Writing cards, choosing, buying and wrapping presents. With her doing all these exciting things it means that Sophie is missing out a lot of toddler toys and learning. She isn't really interested in drawing and colouring as much as J was. She just likes to play with the older child stuff! Argh no one warns you about that! She has grown up quicker. I've had to sell lots of older baby/toddler stuff that was never really touched. 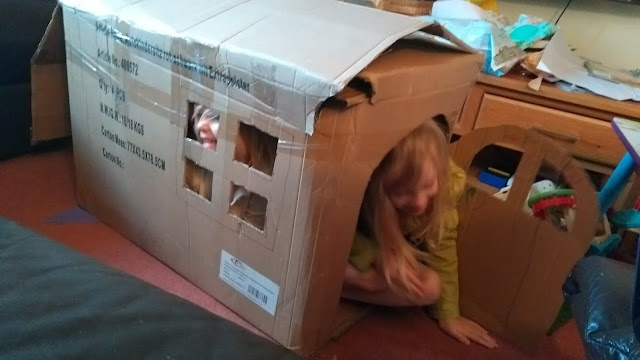 Oh and Jess has her first ever wobbly tooth! Since November ... It's got to fall out soon surely!!? 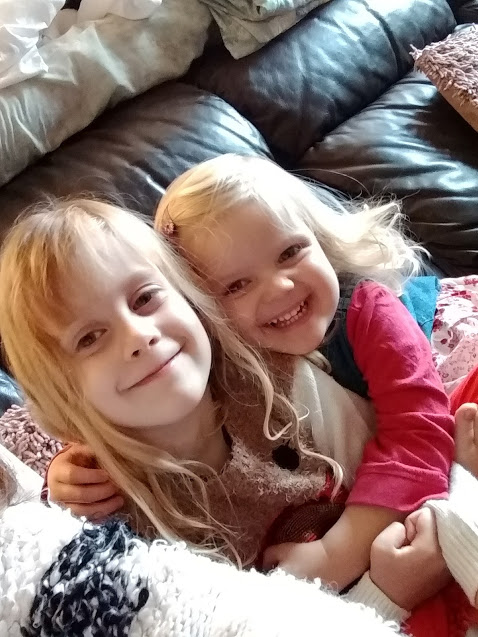 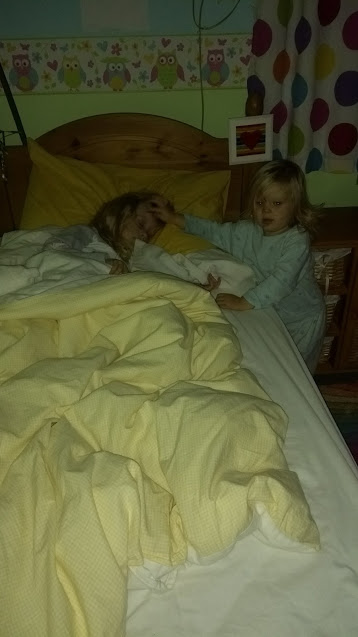 Sophie loves to stroke Jess "to sleep" at bedtime