Sleep strike!! There has been a sleep strike in our house! So I haven't really had any time to put a post together. I dunno what it is about this past week but both haven't been up for sleeping. Last night Sophie went down a little easier but Jess is still up and down like a yoyo with various excuses! I think she is prehaps not needing as much sleep now she is a little older and is quite happy with 945pm - 745am. She could do with being woken earlier to pull that back earlier but yea that ain't happening! Nothing is ripping me from my bed earlier than needed. She was up at 7:20 today though so hopefully she has reset herself a bit for tonight!

Not much has gone on really in our house. Being in lockdown limits a lot of stuff we can do. That said we wouldn't do much this time of year any way though.

The kids managed to amuse themselves one day by throwing a magic show. Jess had prepared some tubes and attached them very well to some trousers and socks to mimic legs. Unfortunately we never got to see the full show as they were fighting in the middle of it! A previous attempt also failed as Sophie wasn't holding the legs right or something lol. Picture of said legs attached! 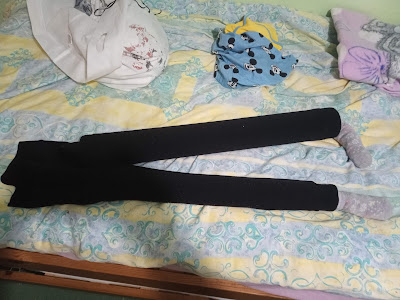 Jess wanted a bun one day in her hair for school. It was a little wonky and not held too great as her hair isn't quite long enough. She insisted I took a photo ... 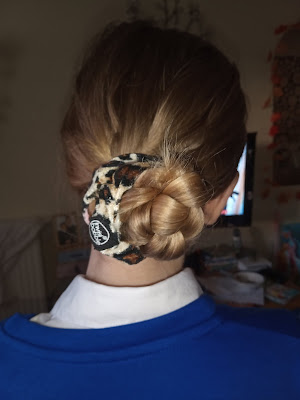 Oooh Jessica has had her letter to say she has a interview for a job in the school library! She had her interview yesterday which apparently went quite well. She had to order books by title name and then by Author. But she got 1 wrong as she thought it was by first name not surname. They asked her some questions and things and said there are 60 children they are seeing! But only 10 places so she probably won't get the job she thinks but good life practice any way! 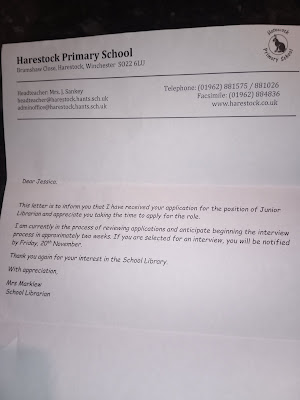 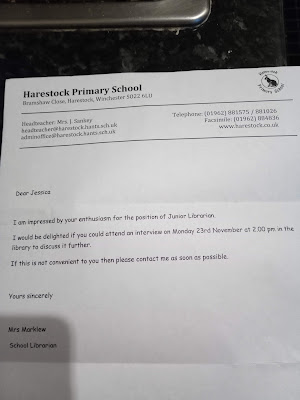 Sophie decided one weekend day that she was going to wear my tights for the day! LOL!! My kids are soooo mad! 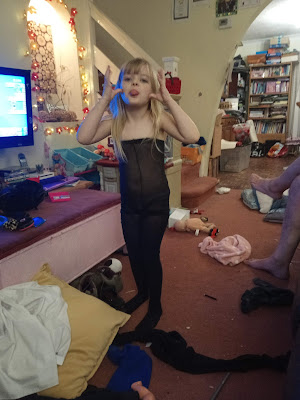 Jess decided to do a painting one day and wanted to put it on ebay to sell. I said we could try on our blog as people read about her and might be interested. She suggested £2 which I thought was very fair and quite suprising really! As expected her nanny snapped the picture up. Thanks nanny! She was really excited. Although she has specified that any more must be brought by people that aren't nanny lol. They have now been creating more they want to sell so I might put them up another day! She wanted to try £10 but that ain't happening hahaha!! 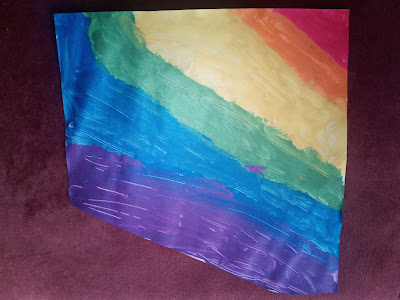 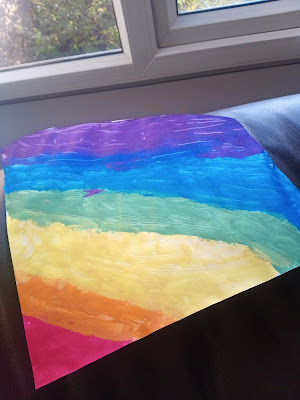 I took a picture of someones lawn on school pick up one day. I wonder what dug up all the moss and grass! I thought perhaps some squirrels had buried nuts there or something but I later (on another day) saw lots of crows there. So something is in there they liked! 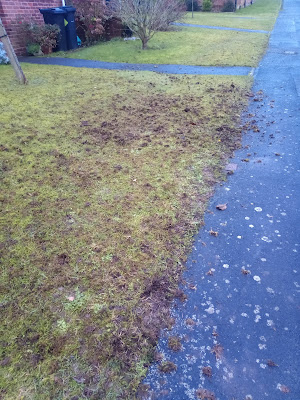 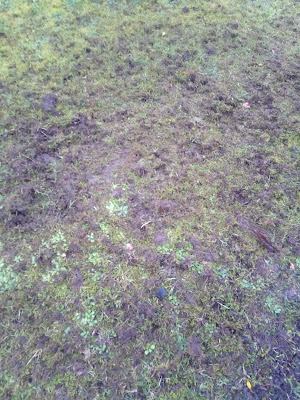 Look at this tree! It looks like it shouldn't be standing. And look how spooky it looks in the dim, drab daylight! 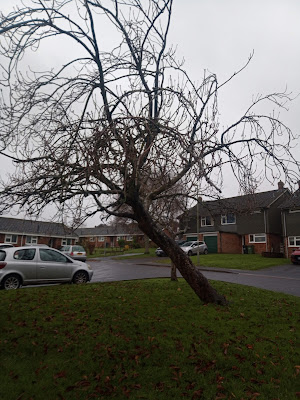 Sophie came home with some spelling work which she decided to crack on with one night. She also did her - late - work from the previous week all in one sitting. I am not a believer in homework in primary school so I don't push it. But if a child decides they are going to do it then I actively encourage it. 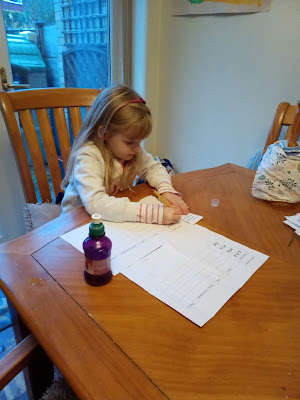 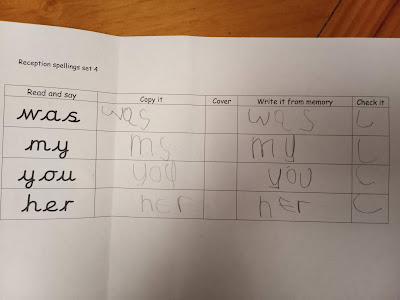 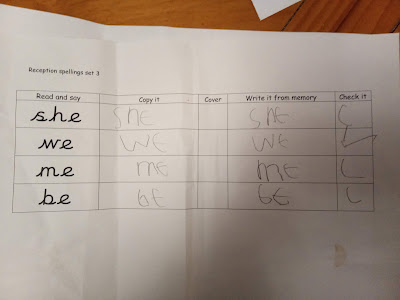 Jess spent ages colouring in a picture of a hill and night sky for her best friend. She got fed of up colouring the sky so got me to do it. Then decided that I didn't colour it black enough so started going over it. Then got aching hands so gave up LOL! That brings back memories! 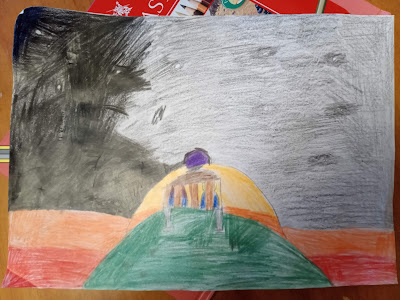 I took to attacking Jessica's bedroom on Monday again. I dunno how on earth I can tidy it one day and the next its a bomb site again! :-o 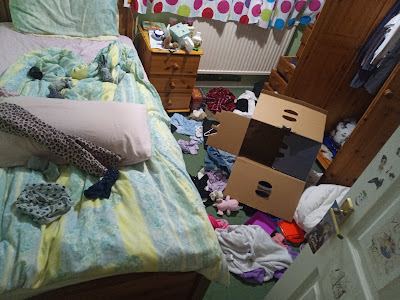 Friday saw me going to the chippy - like the rest of Harestock as the Q was huge! The biggest I have ever seen it! 15 people in front of me and by the time I left that and maybe more behind! I waited 45 minutes outside for my order. They were jolly good though!! 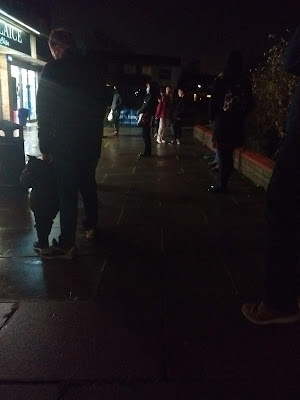 Saturday saw me going through Sophie's clothing and getting out the winter clothes. Looks like the poor little lamb has no age 5 jim jams. I've not idea what we did with clothing when J was 5?! She was tiny though so was still in age 3&4 clothing so maybe we just skipped a year of buying anything! So need to get some for S now. Have taken all age 3 out of Sophies clothing now she is 5! I was doing that thing where there is a peice of clothing you absolutely love and just trying to squeeze her into it one more time haha!! So need to go through the boxes on the landing now to be able to put more that we don't need up in the loft and leave space on the landing in order to be able to pull down christmas stuff. I would like to to get our tree this weekend but too much needs arranging here first before we get it so don't think we will yet! 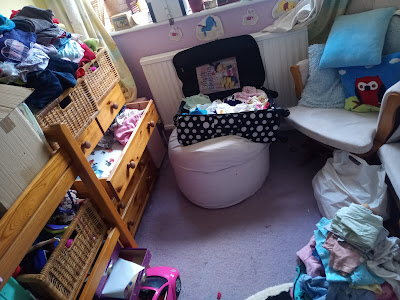 Sunday night saw us playing bingo after tea before bed. Maybe this is why little people were avoiding sleep?! Too exciting! Jess won 2 times, Sophie once and Daniel once. Prizes were maltersars lol! According to Jessica that is ... 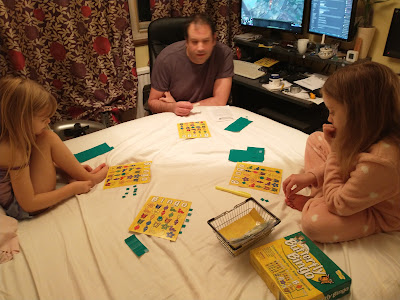 Jess also had a horrific knot in her hair that needed dealing with so she had a shower after I put Sophie to bed and daddy attacked it with the brush! 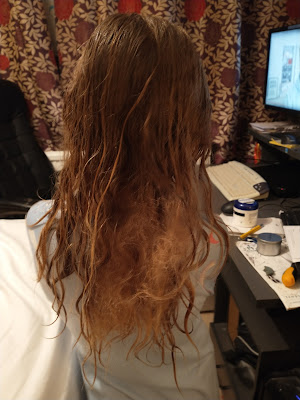 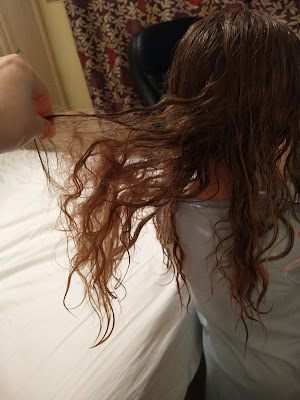 So that's a round of last week and then the weekend. Sorry its late but sleep issues have prevented me from doing it! Keep looking to the skies and enjoying the ... well cloud ... hahaha!!! Almost time to look for snowflakes from the cloud if we are lucky though so might be a silver lining yet! Other to that go looking up for pretty christmas lights! Take Care all X

PS! Oh by the way how is the picture sizes? Do you prefer them like this or would you like them like my previous ones - extra large? I like extra large but think it throws the margins out and makes it look messy. Can't move the margins otherwise it mucks up the photos i've attached to the main background. It's not as good as other blogging sites so might move ... Hmmm! Will investigate more over christmas!