Lot's of strange movements in the house!!

So I have a new phone! What you just got one I hear you all cry out! Well yes I did however I didn't like the camera on it. It is no better than my old one. It annoyed me so much I sent it back and got one that was £30 more expensive for a camera upgrade. That said ... I got it in the black Friday sales meaning that it came in at £10 cheaper than the other one I had brought! Bingo! I haven't yet sent it back as my trainers are leaking I found out this week! Miffed off as they are only 6 weeks old too!! So i've emailed Blacks and am looking to see if I can return them. Then will return both parcels in one hit. Or at least that's the plan!...

Nothing of note has happened this past week .Very run of the mill except having Jess home Friday with an upset tummy. The weather has been cold so i've been dressing up like an eskimo to go on school run. Mostly been around 2c every morning this week - Brrr!! 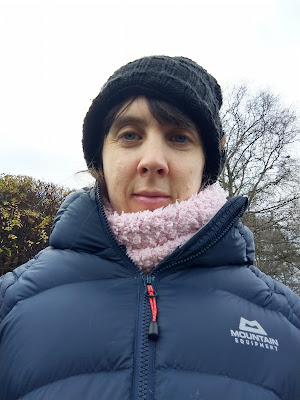 I forgot to share with you a mad weekend back in October. We pulled the sofa out - mostly to look for small missing bits of toys so I can sell them! Didn't find any! But my goodness look at all the mank down there!!! It hadn't been pulled out since Jess was a toddler I don't think. So at least 6 years or so of dust, toys and grime! 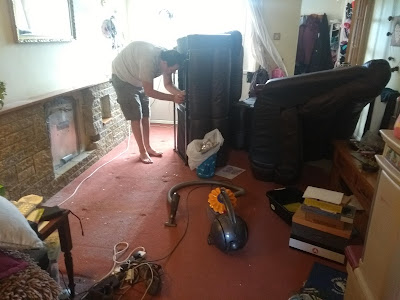 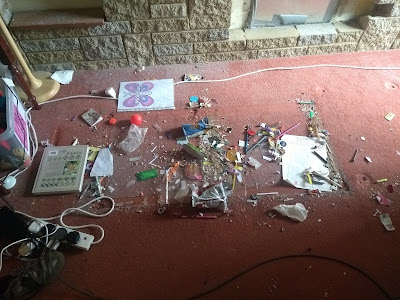 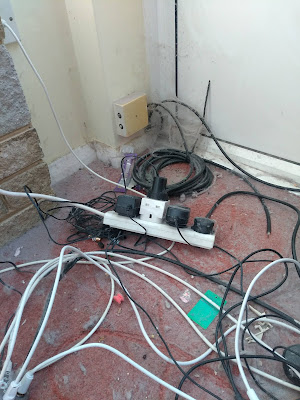 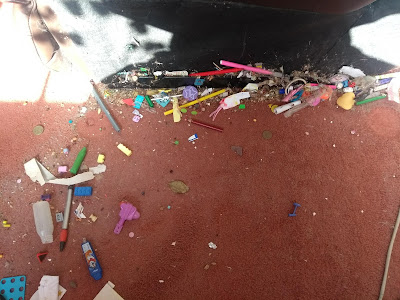 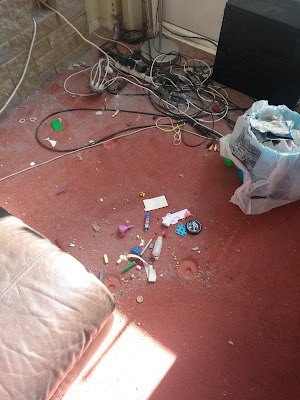 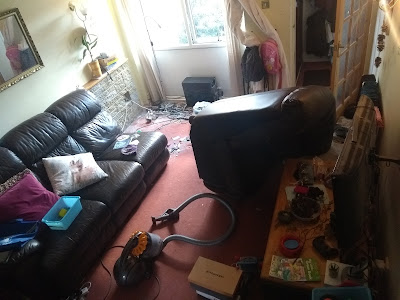 This weekend has been spent preparing for Christmas! We are waiting until the 1st December - His indoors idea I would have been ok getting this weekend. Although going during week = less people = less covid risk so makes sense.

Saturday saw me clearing the corner at the bottom of the stairs for the tree to go in. This was a mixture of both throwing some stuff - old magazines and bits of paper! Moving books and toys upstairs and selling the book sling as we don't need it any more. Yippeee! Only £7 but wanted a quick sale and people were going mad for it. Had over 10 messages so a long Q of people for it. I then was on a roll so got upstairs an d went through the boxes on the landing sorting out stuff for NCT sales when they get going again! Plan is to get cracking with selling junk come January once christmas is out the way and kids are back etc too. I then made a nest in Sophie's room and rested my painful back whist reading some of my Christmas Chronicles book and listening to some relaxing music over my phone.

Sunday saw a lady coming to pick up the book sling. I had a shower to freshen up for the new week and then was somewhat lost really! A weird old day. Felt emotionally off. Lost and like I should be busy doing something. Couldn't settle or find my inner calm at all. I tried to spend some time watching Songs of praise and listening to some music on youtube whilst reading my Christmas Chronicles book and I knitted some more of my little dog. I finished his head and made 2 legs. I felt too unsettled to do anymore. 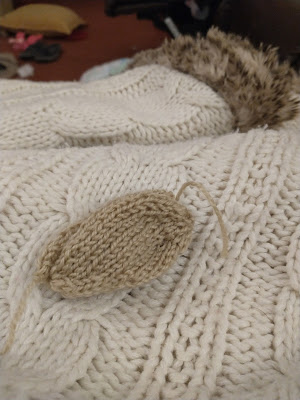 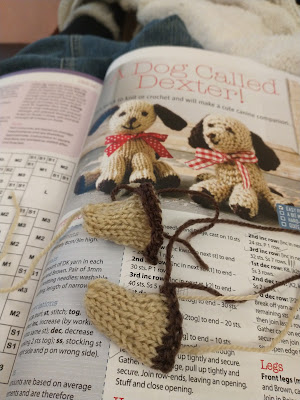 Took a quick 5 minute walk around the park after tea then started off on bed and school prep routine and that settled me down. Sophie had told us about her boyfriends. She has 3 boys to choose from?! They all keep chasing her at play time and she doesn't know who to choose lol. She however wanted to make a card for her ex-boyfriend who she was tell she loves. So we went across the road to deliver it as he is just over the road. He then posted one back later in the day lol!! 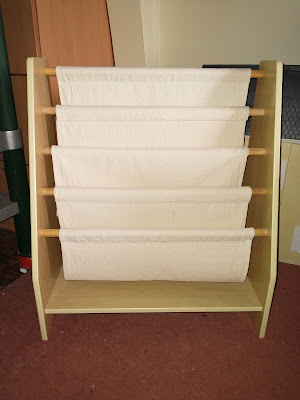 Jessica spent the day using Sophie as her minion. She set up a sucky washing station in the bathroom. (Suckies are pillowcases that she uses as comforters and sucks on). She got Sophie to wash them and hand them in her room to dry. She had set up a washing line out of a skipping rope and put towels on the floor underneath for them to drip dry on LOL! I think she has worked out that each time they get real washed and are dry I am taking them away to hide! Trying to reduce her having them so she's taking to washing herself! 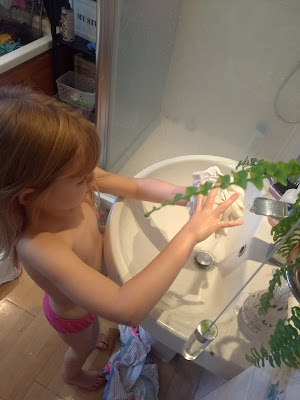 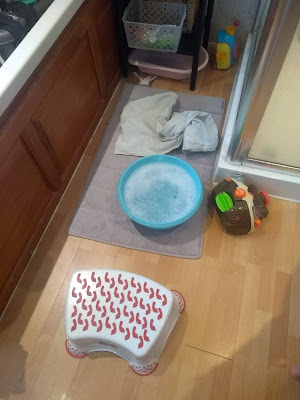 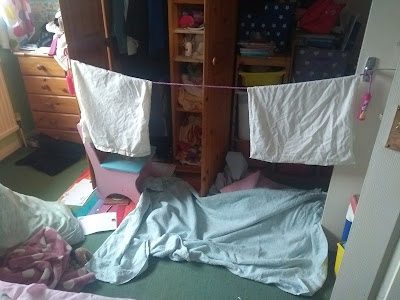 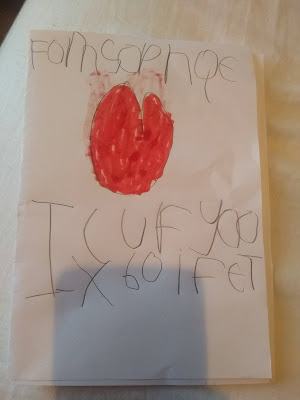 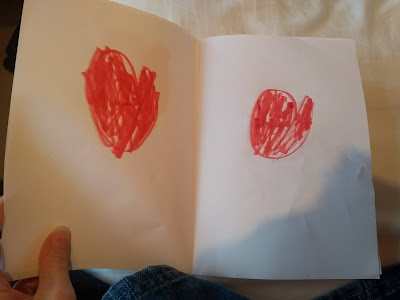 I have been hearing movements over the past week up above. Thought it was the neighbours at first moving around against the wall or something as it was small bangs and sounds like wires moving. The other night I heard a sound more like a small jump and then worked it out. The mice are back ... Haven't had them for a few years. And there are some fat balls in the garage that I had got earlier in the year for birdies. I found a big hole in a packet and not so much balls as lots of crumbs left! I guess if there were little seeds in there they were going for them! So i've moved them out. The seeds are in a storage box which they have had a good try at getting into over time but not been successful!

Last night I went to check the girls and shut their doors for the night. Turned the corner to go along the landing and nearly tripped over this!! Scared me half to death and how I never screamed I shall never know!! Daddy picked her up and put her in bed and I carried all the pillows and bedding. She looked very dazed and couldn't work out what we were doing or where she was lol. Why she thought sleeping on the landing was a good idea i've no idea! It was funny though. 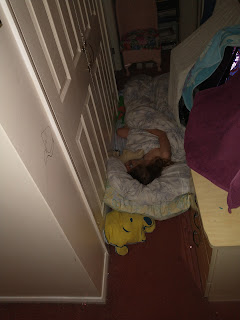 Right that's about it for now. Need to get this up and start looking on Amazon for stocking fillers for the kiddos! Keep your chin up everyone! Christmas is nearly here then the count down to a vaccine starts! Yippeee! Right sleep well - Or good morning if your an early bird reading this! Take Care! X