Spring is in the air!

Life has thrown a massive curveball at me recently. Something I did not see coming. Something that I would have never seen coming from the direction it did. Something that hit me square between the eyes and had me flat on my face. Something that has you gasping for breath and feeling like you have gone insane. Is this true? Is this truly true?! Something you have to pick yourself up and from and dust your self down. It's not you. It was never you. And yet it changes you ... for life. I don't know where I'm going with this. Except I keep revisiting this place. I can't seem to find peace. To ground myself. I don't know where to move on to. And yet I must keep putting one foot in front of the other. I must fight for me. For my place. For my rights.  Any way enough about me and my screwed up head right now! Life is otherwise sameish. Nothing to add. For real on this week! So this will be a quick one! Let's reverse back to:

Kids went back to school yippee! The day was spent mostly in me sleeping for 3 hours and chilling on the laptop before getting kids after school. Well I lie did empty the dishwasher ...! I think my sleeping lots is both because I am tired and to pass time. The day in lockdown is so long, boring and lonely - What else is there to do?!

Jessica had been up early for some reason - I think she had a nightmare in the night - But she crept into the big bed and slept with daddy. This is how I found them when I came in at 7:45. Awwwsa! She loves sleeping with daddy apparently this snoring is relaxing and helps her sleep??! Has the opposite effect on me!!! 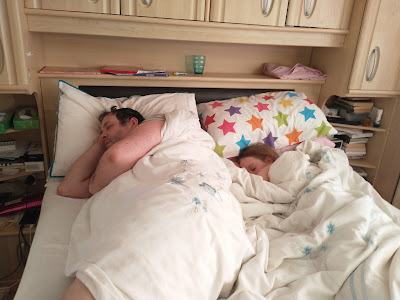 Wednesday 10th March:
The kids had pizza, salad and odds and ends for tea. Sophie insisted it was by candle light. How romantic! lol!! I wasn't hungry so ate later and hubby was working late. Fed kids earlier too as they were hungry. 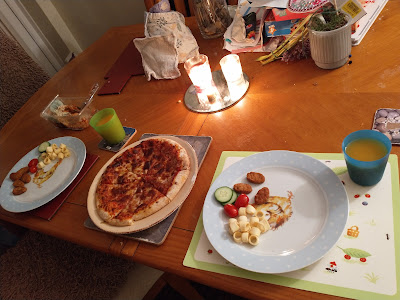 Tonight I lit my crackling log fire candle. Tried to take a short video of it but didn't come out too great. but might give you an idea of how it is. I did a write up about it on another blog post with link to it for those interested. The post can be found here: https://rebekahc-talesofahousewife.blogspot.com/2021/02/crackle-crackle-hisssss-hisssssss.html
Here's the video of it: https://www.youtube.com/watch?v=NyV9p3weW4M
Thursday 11th March:
Today was another slow day. But I tried to be mindful on my pick up walk to school. A - Mindful of Spring and seeing the signs of it. But also B - Mindful that i'm late so I can't stop too long to get good pictures LOL!! I woke up to this poor, poor greenhouse! On closer inspection it has had it! The cover is ripped (it had some small ones last year that I managed to get away with mind!) and it's totally collapsed. Don't have time to sort it this side of easter so I have tried to cover important stuff in a tarp/make sure that its under the cover. I dunno what I'm going to do with it yet. Sigh! Tbh it is more being treated as a shed than a greenhouse!! We had some big wind and rain so I knew that it was going to collapse more. Surprised the cover is still on tbh! The tarp on the grass was covering garden cuttings that I was going to use in a fire pit later in the season. Tried to keep them dry but that blew off and all so that plan went boobs up as they say! 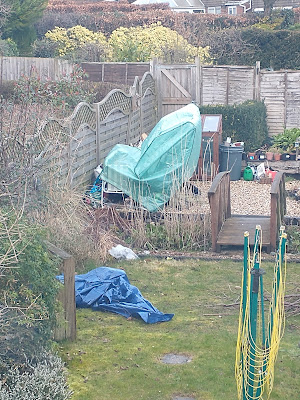 Here's the pics from todays walk to school ... Little leaf buds opening up on this bush. Aren't they shiny and new! 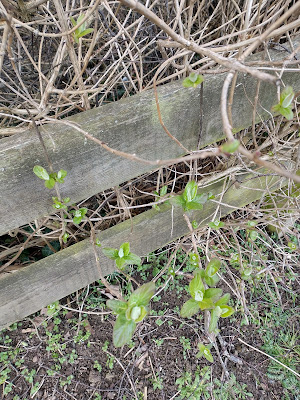 This gorgeous display of daffodils. They are some of my favourite plants. So bright they remind me of the sun and the promise of summer to come! 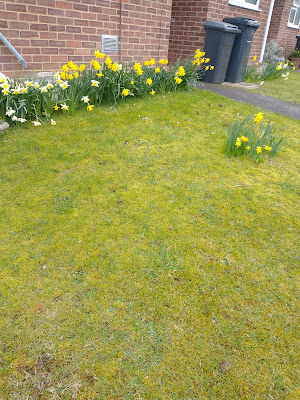 And even some little daisies are popping through ... 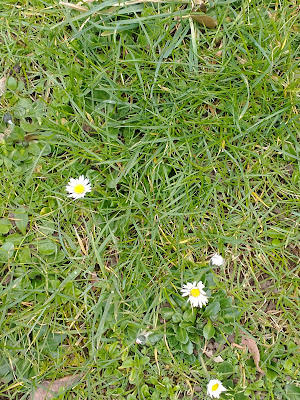 Friday 12th March:
I have had this book on order for a while now so forgot that today was release day! As I mentioned in one of my previous blog posts Jess is well into her teenager streak now! We have some small signs of puberty kicking in as well as the attitudes and temper tantrums. I feel like I am parenting a toddler again! As this book implies though they do almost regress back to a toddler at this age as the brain goes through yet another growth spurt and the hormones kick in. So I have to relearn how to parent again. I feel like a new parent argh! So that is why I pre-ordered this book to get my head around the changes and get some strategies under my belt! I shall report back as I go. It is apparently aimed at 8-13 but is good for those of 6/7 year olds to get ahead of the game on whats coming! And also for younger teens as some of it covers that age range too. 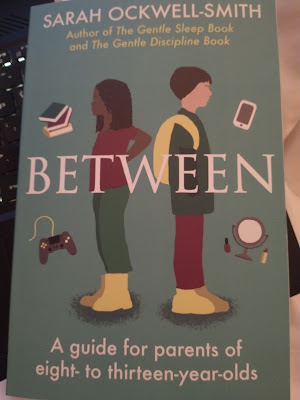 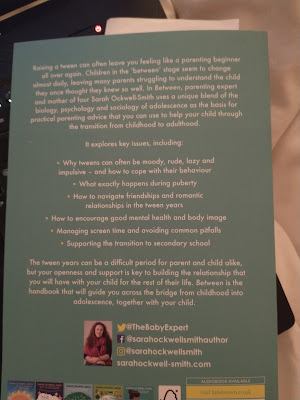 Tonight I chill in bed after kids have gone down easy - Yippeee! Sleep routines are back on track!! Candles on, relaxing music and write to my blog. Then a bit of Gogglebox! Gotta love trash tv on a Friday night!

Right that's it for this week. Sorry it's some what bleak! Guess we all go through our seasons and right now i'm in a struggling/lost season. I'll be alright. I'm a fighter! Just like the seasons I need to find my new Spring :-) So if your also feeling a little blue i'm with you! Gosh that's cheesy hahhaha!! Right off I trot to play a bit of Roblox - talking of trash! Read a bit of book - not sure what one yet! And then head off to beddies. Sleep well/Good morning all! Chin up! Keep looking up! Lots of blue sky around today! Lots of love The Mad House Xx