So last posting I had to stop as it was long and I was in the middle of explaining about having the vaccine! So here it is i'll cover both days in one!

Friday - I had the vaccine at 3:30pm and exactly 8 hours later I started feeling really tired and a bit off. This was 11:30pm and Jess had only just gone down to sleep! 20 minutes later the chills started. I was cold - really cold and shivering so hard my teeth were chattering! Crept to Sophie's room to get the thermometer and check for a fever. It was slight at this stage 37.8c. Half hour later I started feeling a bit achy in the legs and hips. Another half hour later and my temp was up over 38 at 38.3c and I was aching everywhere. This is the point I reached for the paracetamol. Mostly because I needed to get on top of the aching pain so that I could sleep. I was so uncomfortable until that kicked in and then I could sleep. I dropped off around 3am under a thin sheet. The fever lasted until late afternoon the next day. It went around 730pm. That next day (Saturday) the aching was a bit better but I had a mega headache that lasted right up until around 10pm or so when I went to bed. Woke Sunday and felt fine! I went down around 7pm on the Sat night to watch a bit of a film with the family. I desperately wanted to go back to bed mostly because of the headache. But I also was so bored upstairs! So I stayed til the end then went back up. I was really gutted as Saturday the weather was gorgeous too!! I wanted to be in the garden. I had even joked to hubby known my luck the weather will be really good and i'll be trapped indoors with a fever. And lo and behold I was!

Sophie visited me periodically throughout the day - Even bringing in her green dusted to dust the ceiling?! At bedtime the kids wanted to be with me instead of in their beds for stories so 2 books were brought in and hubby read to all of us. Here's me feeling like death under my sheet. 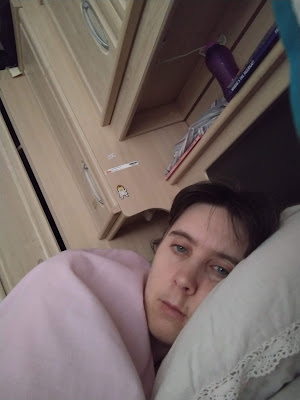 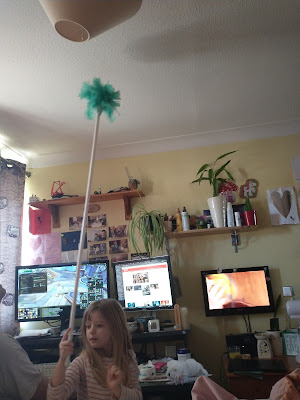 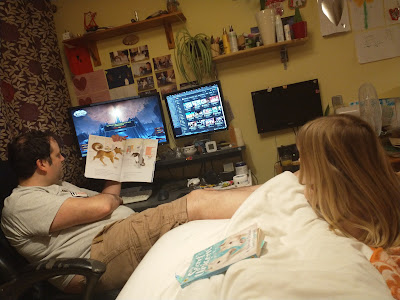 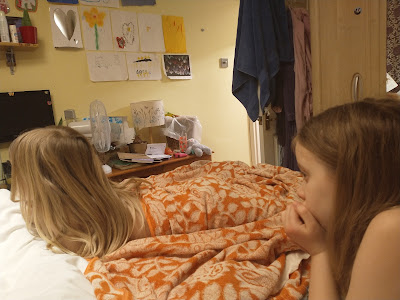 Sunday 28th February:
This one is going to be picture heavy! Beware!! This was the day of the first trip into the garden of 2021. I didn't feel like it but I dragged myself any way. I'm tired and life is too much. This just feels like another must do job. So I start by taking a walk around the garden to take in the sights and sounds of Spring, So here we go ... Come join me!
Here's the pond and we have froggy spawn yay! No fish no worries about them being eaten ... The local heron ate my fish years ago! 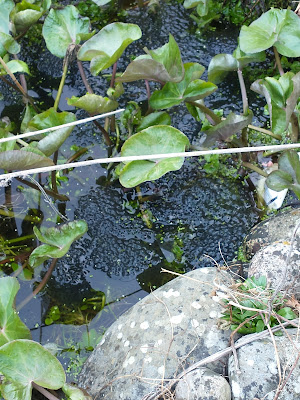 On to the veggie patch. The carrots are still going strong. I could have taken them out for storage but chose to leave over winter. Nothing bad has happened and they are still edible so will go this route this year too. Tbh I am proper proud of myself as this is the first year I have ever successfully grown them!!Yes the planters are somewhat devoid of their willow surrounds. I took them off and put in the greenhouse over winter. This was to try and make them last longer before they break and have to go to the bin/compost! I will get htem out when the weather is a bit warmer/better. Probably over winter. They will need to be linseed oiled prior to going back on. This helps to keep the wood softer and to protect from the elements. 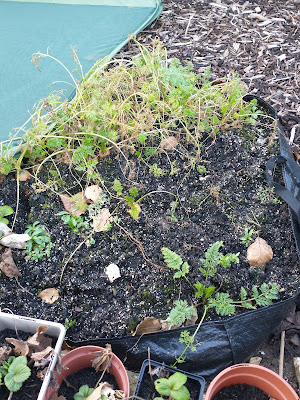 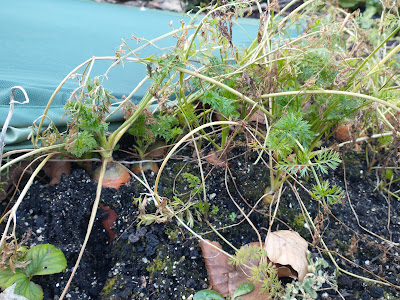 Here's my Spinage. This was over successful! As in last year hardly any came up so I just threw a load in - and yes all the damn sods came up!!! Same with the carrots above! None came in pots last year so I literally threw them in the planters as a last hurrah! If they came up good if not well i'm not expecting them too! I should have given some away to neighbours or sold on facebook but tbh I was too busy with kids home/lockdown etc to care. 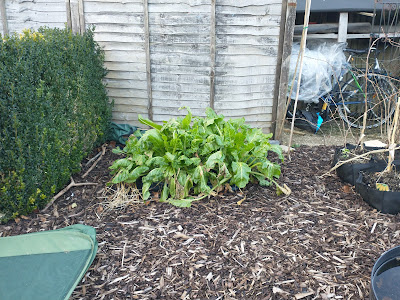 Carrots .. Erm well there was ... Until the rains came and I realised I hadn't gotten holes in the bottom of the pots for drainage!!! This is a recurring theme ... So yes this lot will need emptying and leave the compost (it was brand new sob!) somewhere to dry out once the weather picks up and gets hot. 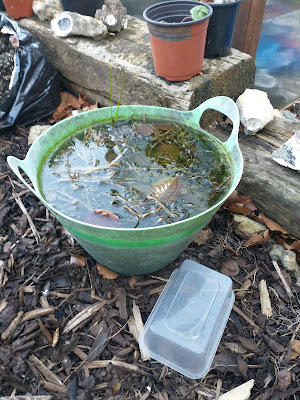 This had a cabbage in it. Now long deaded ... Got eaten by caterpillars. Gutted as it was huge! I should have just eaten the holey leaves but I composted. Will try again this year ... Dunno why i've not yet grown one successfully yet!!! 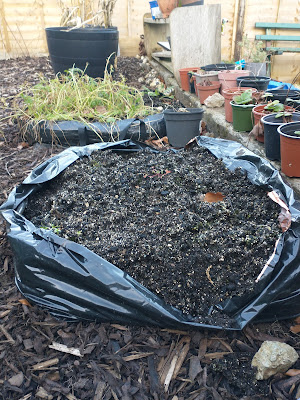 Front water container has winter lettuce in it. Yea well won't be eating any of that ... Same issue with new compost and lack of drainage holes ... Hubby and his drill are gonna be busy!! Back container last years sweetcorn to be emptied. I leave over winter so any bugs and things living on them have a place to hibernate or things that wanna eat it. Here is the sweetcorn in the small planters. They did ok but not as good as the potted ones. These were an experiment as I read somewhere that it doesn't care about deep soil but I think I have proven that wrong as the ones in the deep tubs did much better!! I won't be growing as many this year as hubby didn't eat them - bar 1! Shove them in the fridge and forget about them was done. Oops! 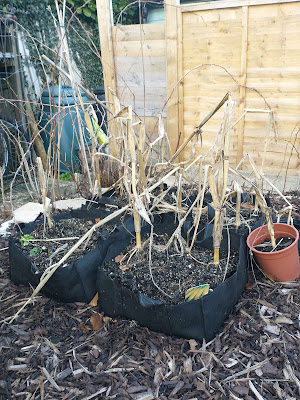 Old tomatoes. I should have pulled this bag in for winter as it looks very sorry for itself now! Will grow Toms here again as this gets a lot of sun. 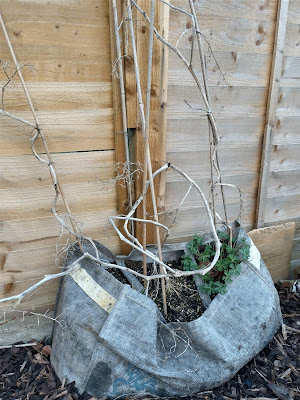 This little Robin fella was following me around everywhere! He even sat there and sang to me. I do love my little Bobbin' as my nan used to call them! That fence panel will be coming down as it's only hanging by one post! 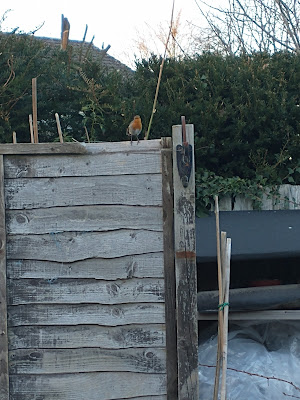 Sacks of main crop potatoes still here ... Better get them out soon before they start sprouting! Once winter is here I always seem to forget about them. 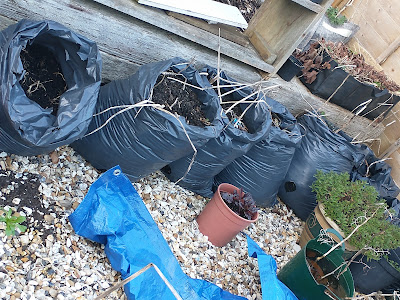 A look at me poor dilapidated greenhouse! The door zip doesn't shut properly as it doesn't actually fit! When I brought it on ebay I knew it wasn't a Gardman greenhouse as I have had them before. It seemed too cheap and fall aparty. The shelves bounce up and barely fit. The Gardman ones I had no issue with before. And the cover doesn't stretch around the bottom but fits over the top. It's very annoying! 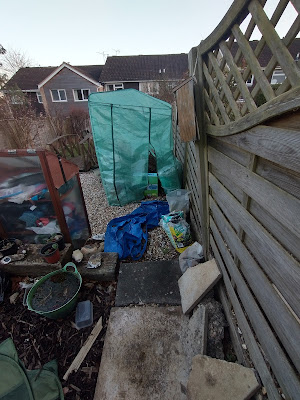 Cardboard city! No we aren't tramps or litterers. I am saving card to go up the garden on the borders. This is to stop weeds from coming up! Last year I wrapped in some plastic and saved them over winter but they got wet. So threw it. Wanted to put in greenhouse but not enough space. So just left them here. On the plus side flattening them out is actually a bit easier if they are damp. 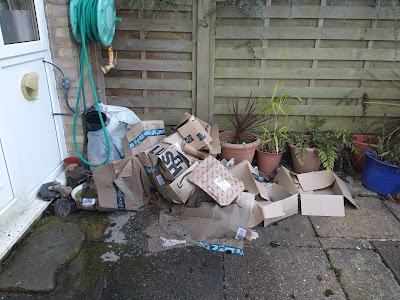 My Hellebores are putting on a spectacular show again!! 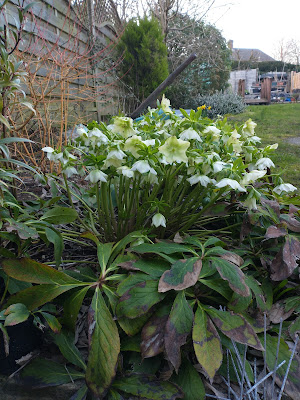 This plant has some tiny whitey pink flowers on. No idea what it's called! 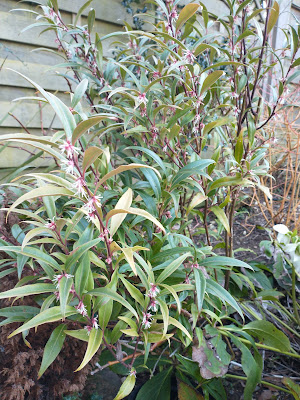 I love this Cornus fire burning bush. It's one of my favs. The camera does it no justice at all mind! I brought it for a quid (£1 for non Brits!) on ebay as a tiny little thing. It's done amazing! It's about 7 years old? 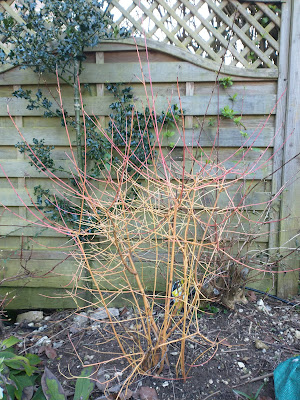 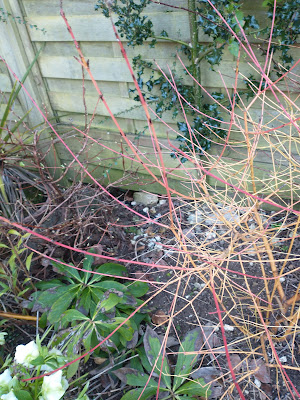 Daffodils poking out the grass! 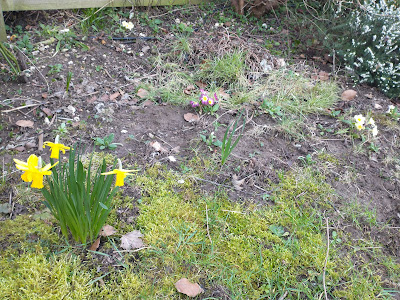 Primroses also in the grass by the border. They have migrated out of the border! 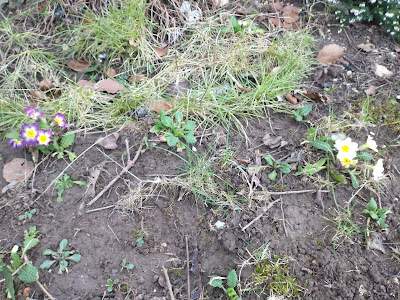 I have a love hate relationship with this heather!! It's so pretty and yet it is so BIG!!! It's taken over all the border and out into the grass now! Dunno what to do with it ... 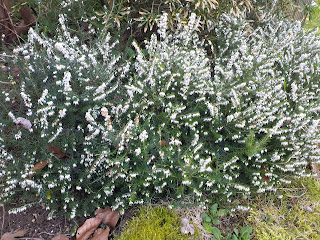 Right that is enough of the garden tour ... Let's cut this bush ... Before picture 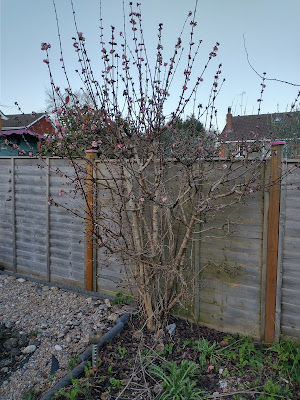 After! Yes there are some straggly bits! But I am only 5ft 2 and this thing is big so I can't reach the back. I'll get hubby on the case when the weather is warmer. He comes out in the summer only lol. Much too cold for him right now! 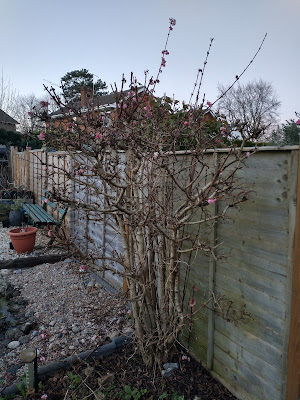 Right under this fence is what was a creeping rose bush. It never flowered and got really long. I don't like it so we cut it right back to the fence last year. However it started sprouting again so i've just hacked those off before it get's going! Any tips on how to kill it?! 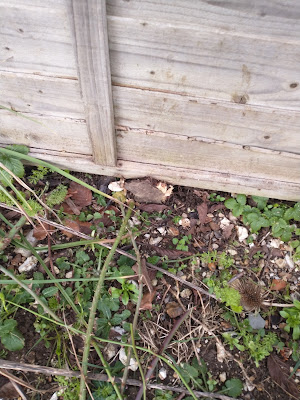 Front picture of the poor greenhouse!! Yes that is a deckchair. I escaped from the kids in there last summer lol. 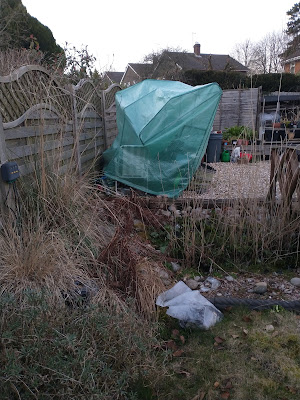 Right i've reached the end of the day and this is what harvest I go indoors with! So despite the weather I was still able to pick carrots, potatoes and spinage over winter. 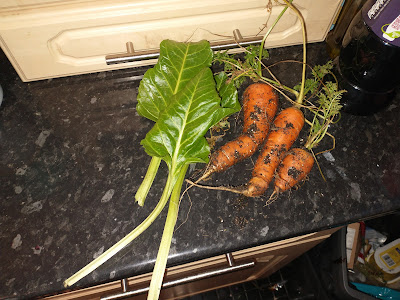 Right that's it for this update! I'll try and get another one in mid week at some point but will see how we go this end! I've been in the garden both days this weekend and am feeling good so let's hope it's a positive week! There is nothing like the sights, smells and sounds of nature to really pick up your mood. A natural antidepressant! Keep looking up all! Lots of love The Mad House Xx
Posted by RebekahC at 17:32