Weee this post comes with lots of excitement! I am ahead on my blog posts now and have 3 stacked up ready to post to you all. And this one marks the start of post number 4. For once in my life i'm organised! Any way enough of my excitement and onto the catch up. We aren't far from the end of September now. Now that we are half way through November *Palm Slap Head* lol!

Someone that hubby knows as a family friend has passed away and her funeral is tomorrow. So hubby travels back home to his mums for the funeral. I stay home with the girls. They only met her a couple of times and I only really saw her a handful or so so she wasn't close to us. Plus the girls have school. So it makes sense for us to stay behind. I like it when he is away as I find the children easier to look after somehow! We adopt a different routine and they tend to go to bed easier. I'm sure a change of routine does us all good. He stopped half way there on his travels and facetimed us before the girls bed. Here's a piccie of our natter lol 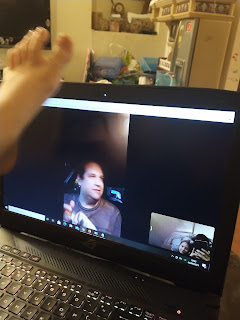 I go out to the bin later at night and notice someone has some christmas lights on. Is that me or are they christmas tree shaped??! Waaay too early in September people!! 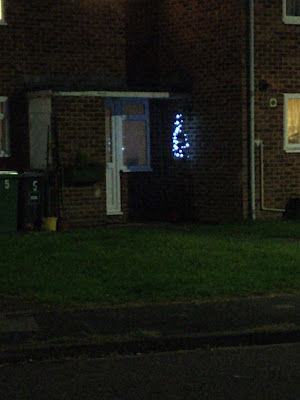 Tuesday 21th September:
School run goes well and I come back to a silent house. It is nothing short of bliss! Hubby still works from home as IBM doesn't want them back yet! Tbh I have given up all hope and think this is it and our new normal forever.
I had a sad moment today when I went into the kitchen and found Jessica's self portrait painting was on the floor. It has been here since she made it in Reception! So that's 5 years! The blue tack has held up well lol! 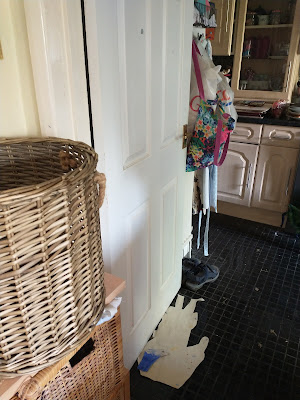 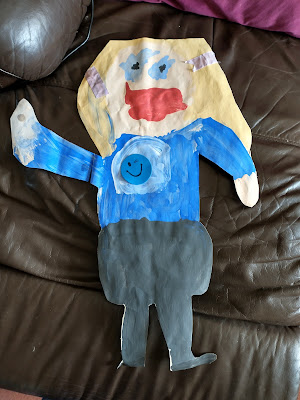 I want to say we went to the park today after school run. We got in and had snacks then went over for an hour or so. After the madness of tea, baths, hair washes, hair dyers and bed time it was time to prep for the next day. The kids were in bed late as we just ran behind out routine so much. Baths - esp when doing both - take forever! I don't do them often - definitely not daily baths!! And prefer to do them separately! I got them in be did school prep for the next day - lunch boxes, breakfast bowls etc out, coats and shoes at the ready and bags all ready. Then I crept into bed and lit my flower oil burner to chill before sleep! 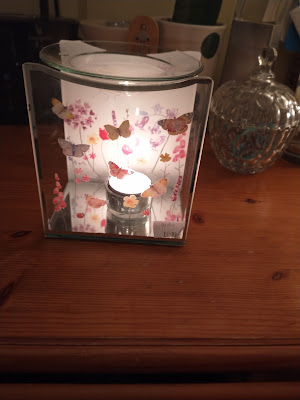 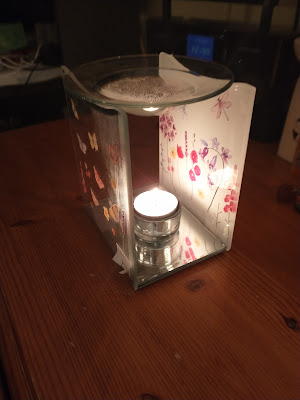 Today was all about the home cooking. The kids love chicken stew so I put some in the slow cooker. I say the kids - Jess used to love it but now picks at it - Sigh!

As I was going into the kitchen to make it I noticed Speckledy laid down on the grass just chilling in the enclosure. Thought it was cute so snapped a quick shot out the window. Didn't open the door or she would get up and come running to me! 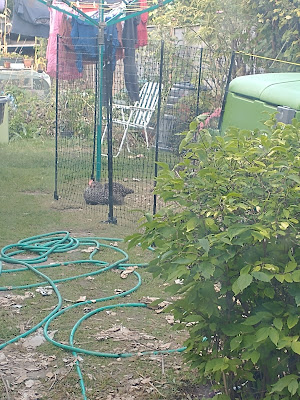 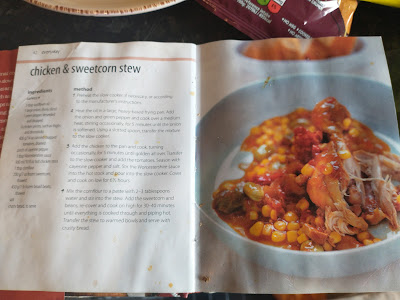 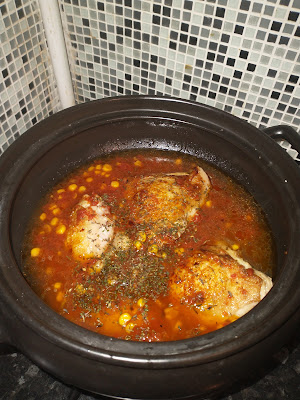 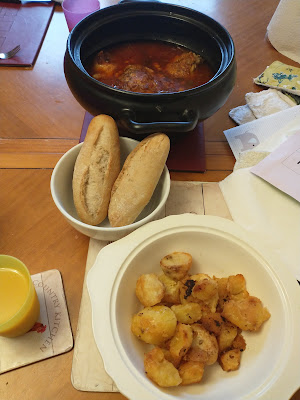 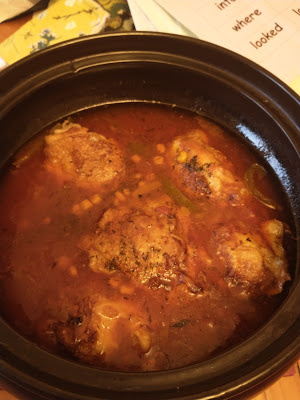 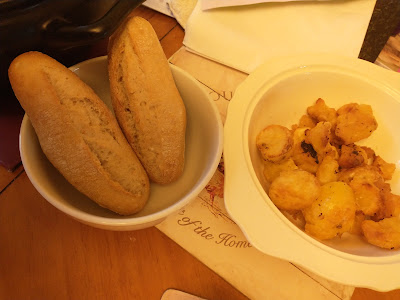 Later on in the day I looked out to find the chickens had gone right up by the pond. They haven't gone that far before! They will be in my veggie patch next ...! With hubby away still there are no swimming lesson today. It would be a tight squeeze to get there and would mean 4 buses. 2 there and 2 back. 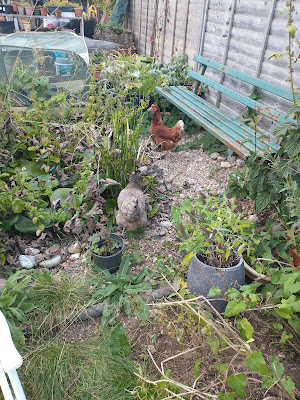 Thursday 23rd September:
Mummy took the lid off the food bin to top up the chickens feed tonight. And well peckers went for it! Flew straight in and tucked into a right old feast! Here's a video of her: https://photos.app.goo.gl/GbyGCVn8JMgnVQCXA
Sophie then fed them some corn and put on the play table for them to fly up on and get to. Here's a video of them tucking right in: https://photos.app.goo.gl/cw8rSvFqG1wGKxoY8 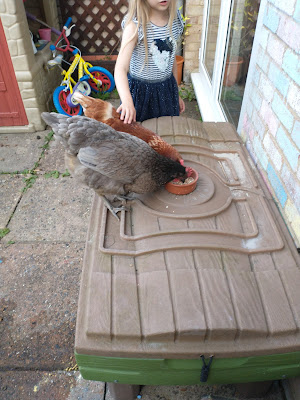 Friday 24th September:
It is Friday and hubby comes back tonight. Someone else who is a family friend also passed away and has their funeral today. So he decided to stay for that too and come back tonight. Fine by me we are managing! But before then I have a day of fun. Got my flu jab booked in so I need to get to Badgers F Farm on 2 buses there and 2 back. As it so happens I arrive a little early so go into Sainsburies for some tights for the kids. They don't have any ... Sigh! So I come out with other random clothing tatt instead!
Sit in the sun for a bit then go in for my jab. Come out and wait ages for the bus to go back home. And ages again at the train station to get back home. But job done I am now flu jabbed!
I noticed on school run this morning that they have cut down one of the trees on our school walk! All that's left is a pile of logs! Would be good for our chicken run that! 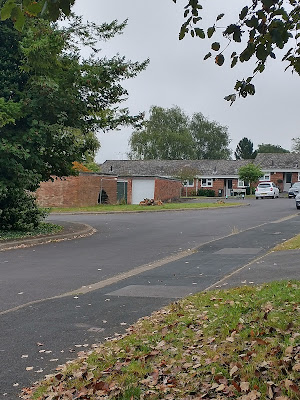 When i'm back from Badgers Farm I sit on the sunbed with some caffine for a bit. The chickens take to the soil for a dust bath. It's really funny watching them so I had to take a video: https://photos.app.goo.gl/KH7xCSTuwPPFsNtY9 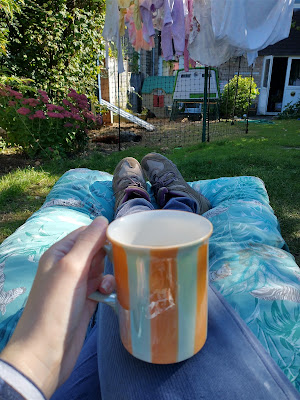 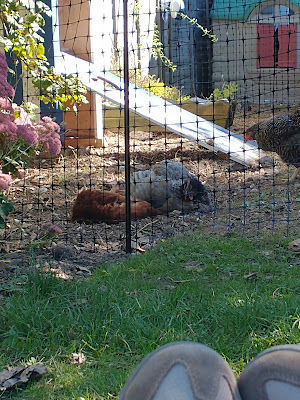 They want to come out sometime later so we let them out and feed them an apple to fight over! 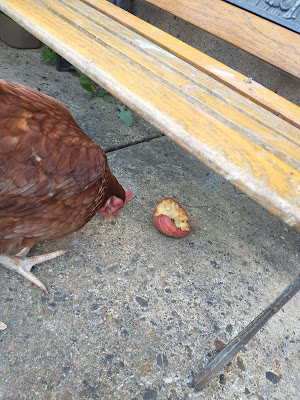 At bedtime Sophie laid out all her books from school. These are all for her to read! It's madness! We send one back and the send home 3 more! ARGH! We just never get to the end of them! 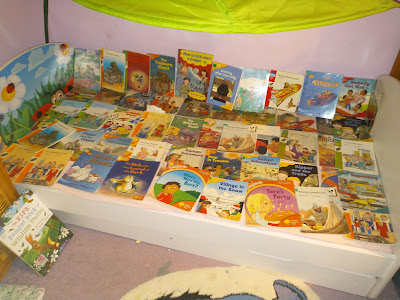 Right that's it for another round up! As I write this (goodness knows when I will actually post it lol) it's Friday evening and we have rounded up another week at school. Sophie spent the evening painting my nails for me. I've had a blood test to check hormone levels and then stood in a long queue at boots for my scripts. So all fun and games! Just going to post this - write another one - and then depending on how much time is left i'll do ... something ... reading? crafting? I dunno LOL! We'll see! Right gonna sign off now. Sleep well all! Keep looking up. Lots of love from The Mad House Xx