Hmmm not much to report on these days to be honest. I am really, really, struggling to get into any form of routine this time round. It is because of the Zoom meetings. They just aren't working for me but i'm going to stick this week out for having them on a Tuesday and a Thursday. Yesterday I struggled mentally over the whole lockdown thing. The day was long and dragged. I just felt totally off routine and struggling. I am really missing the good weather of last time where I could set them an activity in the garden - like our nature study. It is just too cloudy and yucky to do anything! Sophie refused any work past the page of an A4 English sheet. And I had to struggle to get that out of her. Jess did everything set but did it so quickly I feel I need to set her more. I shall increase something new every day I think to build it up slowly so it's not a complete shock! The zoom meetings were hidden in a file on purple mash and no email was sent to say they were there so it was a surprise to find them! However I didn't plan to attend any way! The school work wasn't up Sunday night when I was planning either so it meant that I couldn't pull this into Mondays work so I based some stuff on a loose planner they had given out to last Tues/Weds. Apart from the usual Maths, English and spellings I put her on phonics play for some revision of phonics but she wasn't really interested bar 5 minutes. I logged her into purple mash where the work for the day was posted so printed out a Maths sheet but again not interested! The kids were too busy making and "selling" bracelets out of beads. 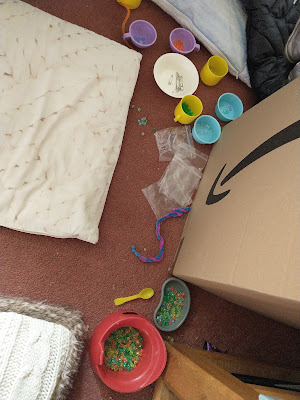 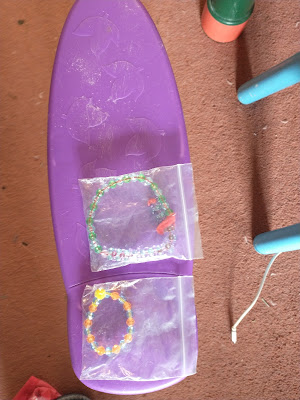 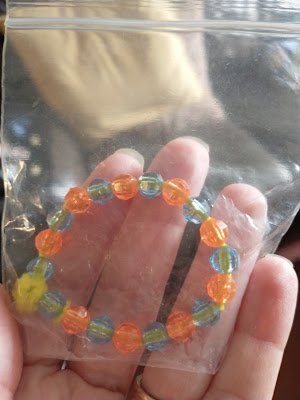 After school work I managed to get a good amount of housework done and have got on top of the clutter downstairs so that's one positive.
Today - Tuesday - Up at 8:30 for Sophie's English zoom at 9. We were 5 minutes late logging in and then another 15 minutes late getting in as it wasn't working on her ipad. So I had to log in on my laptop in the end. Thankfully the work set was easy and just about adding "ed" onto words. Then it was Jessica's zoom time for Maths. I left her to it as she was doing fine herself so didn't sit with her. She did angles. It was a revision of year 3 stuff so she isn't missing anything new. The annoying this is this work appeared on purple mash to be completed by the 10am Maths meeting. Would have been nice to have had this the day before so I could have got her to do it before bed or something. We didn't even see it before the Maths meeting as we didn't get up til late! So it means they are marking work she hasn't done. And the same for English which was about writing to a diary. She did one paragraph and was told to log off and to carry on writing for another 20-30 minutes but she was having none of it. Because we have to be up and on the ball so early (and i'm still not sleeping til gone 2-2:30am!!) I am really tired. It just doesn't set me up well for the day and i'm too tired to fight with them to get the to do work. Sophie had her zoom Maths which was about ordering numbers - which is biggest 21, 6, 18 and order them. Again she found it easy. After the zooms were done around 12 I went up to Jessica's bed and into a deep sleep for a couple of hours. Got up and fed kids snacks. Sat on my laptop with coffee watching some Big Jet TV again whilst I was waking up and then pottered around the house a bit. Didn't do as much as yesterday - todays the opposite of yesterday. The day has run away with me and it's gone 5-6pm before I know it! We had chippy for tea as Sophie has been asking for ages. They over salted my pineapple fritter so I didn't enjoy it much really! We watched some Yorkshire Vet on tv which was good. Then the kids wanted to do some learning - at 9pm! So Jess went on purple mash a bit but soon got bored again and Sophie on reading eggs. I pottered around tidying the bedrooms and landing. There is play dough all over Sophie's carpet! :-o Can't be arsed to drag the big hoover upstairs - too big and heavy so opt for the hand one. But tbh it's useless and lifts nothing up!

I started to get tummy ache which was very tight and squeezy. Quite painful and was starting to make me feel sick from the pain so chucked down some buscopan for IBS. Quickly got kids in bed so I could settle with a hot water bottle. But they picked up on me being in pain. Jess was very concerned and came out with a hot water bottle for me. She told me off that I need to look after myself and rest but I said I can't as I need to get you two in bed! Did a number 2 and that helped to take the worst of the pain off after. Either that or the drugs were kicking in. Fought kids back to bed but then Sophie was complaining of tummy ache! Shes a rubbish eater at the moment so most likely hungry. When asked she said a bit so made her some cornflakes. Whilst she's eating them I put the kettle on for a hot water bottle. Settle on the sofa and sigh from the amazingness of the burning heat! Sophie re-appears - Still got tummy ache and asks for a hot water bottle. Well with the pain i'm in I ain't giving up mine! So I look for the tiny one we have and give her that. Jess appears has a sore and is more likely checking on me. Finally ship them both off and see no more of them at 11pm! Watch a bit of a dog rescue programme with the RSPCA on tv for half hour then I really need to plan school stuff. So I plan - easy! Sophie gets all of yesterdays stuff she didn't do! And Jess didn't do what I had planned either for today as I was too tired so that's that sorted. Just need to print Maths and English for J then done. Then it's time to come here and write to you guys! I've been sparse on the photo front so i'll try to remember to take some more! The only photo I have from today is this race ending ribbon that Sophie put up!? Nothing happened with it so i've no idea why it's there lol. I just came down from my nap and found it. Felt bad untapping it to go to the kitchen for my caffine! 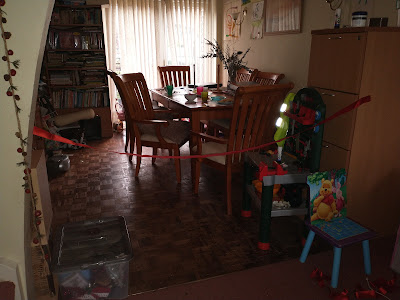 Right that's it for our update. Sorry it's not more exciting! I guess this is life in lockdown ...!! Same old, same old and being totally our of routine and an emotional mess! Settled myself down to bed last night with a meditation from headspace and then put some relaxing music tv on you tube on the tele. Not that it helped I still saw 2:30am! When I do finally get a good night's sleep it's going to kill me. That rough, really tired feeling you get after good sleep! I dunno what's causing me insomnia. I'm not actively worrying about anything at the moment May it's delayed from last week or something when everything all went up in the air. Who knows! Oh got offered a laptop from school today but declined it as hubby found an old one we had forgotten about when rummaging in the cupboard for something. So it's all updated and being used for purple mash and online work. Right i'm off now. Going to try some more relaxation before sleep and see if it helps me. Take Care all. Hope your coping better with lockdown than we are this end! Keep safe and follow all the rules please! Chin up - We are now half way through winter! Lots of love - The mad house Xx